AI is Artificial Intelligence – robots or humanoids. The AI Church seeks to establish worship of AI.

Here is a link to the article about AI Religion: AI Church

This is a very sad prospect because it is false.

There is going to be a time called “The Great Tribulation Period” in which the Lord God of Israel will judge the earth for its ungodliness and unrepetance with plagues and the wrath of God.

During this period of time, the antichrist will arise. He is called the beast in Revelation 13, and he will be accompanied by his false prophet. All the world will worship the beast or antichrist:

Revelation 13:8 (NKJV) “8 All who dwell on the earth will worship him, whose names have not been written in the Book of Life of the Lamb slain from the foundation of the world.”

The Scriptures declare that the antichrist’s false prophet will make an image of the beast and the whole world will worship the beast and his image:

This is the false prophet who will aid the beast (the antichrist) in setting up his false kingdom on earth.

“12 And he exercises all the authority of the first beast in his presence, and causes the earth and those who dwell in it to worship the first beast, whose deadly wound was healed.”

All who do not repent and believe the Gospel of the risen Lord and Savior Jesus Christ will worship the antichrist – it is written in the Holy Scriptures.

“16 He causes all, both small and great, rich and poor, free and slave, to receive a mark on their right hand or on their foreheads, 17 and that no one may buy or sell except one who has the mark or the name of the beast, or the number of his name.”

One thing the Bible makes absolutely clear is that there is going to be a one world religion.

Though the AI Church is false, it is another sign of the truth of the Scriptures in regard to “Last Days” deception. We should always believe and entrust our minds and hearts to the written Word of God and to the God who wrote it – the LORD God of Israel – Jesus Christ. Am I saying that the AI Church is the one world religion? No, I’m not. However, it is a bearing in the wheel. It is another step in the direction the Lord Jesus has revealed the world will go. It is a part of the global scheme of Satan to deceive.

Anything that contradicts the biblical Gospel of the Lord Jesus Christ is anathema, accursed – condemned by the apostles of Christ:

Galatians 1:6–10 (NKJV) 6 I marvel that you are turning away so soon from Him who called you in the grace of Christ, to a different gospel, 7 which is not another; but there are some who trouble you and want to pervert the gospel of Christ. 8 But even if we, or an angel from heaven, preach any other gospel to you than what we have preached to you, let him be accursed. 9 As we have said before, so now I say again, if anyone preaches any other gospel to you than what you have received, let him be accursed.10 For do I now persuade men, or God? Or do I seek to please men? For if I still pleased men, I would not be a bondservant of Christ.

Please remember that there is only One Godhead, and HIS NAME (Not Names) is the Father, the Son, and the Holy Spirit. In the risen Lord Jesus Christ, dwells the fullness of the Godhead bodily. God became a man in the person of His Son, Jesus Christ.

Because of God’s exceedingly rich mercy, He loved us and died on the cross in our place taking our sin and God’s wrath upon Himself for sin. He was buried. He rose again from the dead on the third day according to the Scriptures. He ascended into heaven where He presently sits at the right hand of God the Father. He will soon return to this earth and establish His kingdom upon it. In doing so, He will punish the ungodly for all their ungodliness against Him, and He will reward all those who have repented of their sins and believed in Him. Satan is a liar and the father of all lies. The AI Church is a lie. Worship God, the Creator of the heavens and the earth, for there is no other God but Him. He has revealed Himself through His written Word – the Bible. If you read the Bible, the Author of the Bible will speak to your heart.

Dear friend, do not be deceived by the lies of Satan. Follow the God of the Bible and worship Him alone. God bless you. 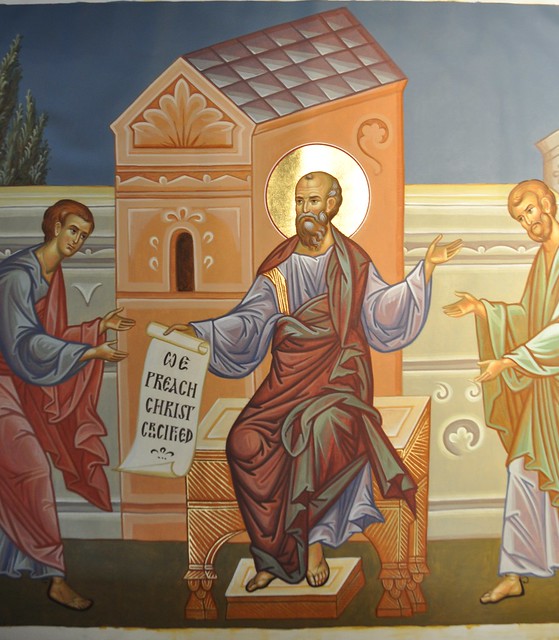 PAUL IN CORINTH: A TRUE APOSTLE NEVER CEASES TO PREACH THE GOSPEL

Paul came to Corinth and met Acquila. He stayed with Acquila and his wife Priscilla, and he worked with them in the tent making business. Paul shares the Gospel with both Jews and Gentiles when he enters the synagogue of Corinth, and he seeks to persuade them all to believe the Gospel of our risen Lord and Savior Jesus Christ. As a true apostle of Christ, Paul was relentless in his preaching and teaching of the Gospel and in his desire to persuade all who listened to repent of their sins and believe in the Lord Jesus Christ. As is demonstrated in the book of Acts, a true apostle’s ministry emphasis is the preaching and teaching of the Gospel of Christ and making disciples that will live the crucified life through the Spirit of God. No true apostle of Christ will fail to share the Gospel every where he goes. May the Lord Jesus Christ bless us with His understand of His word.